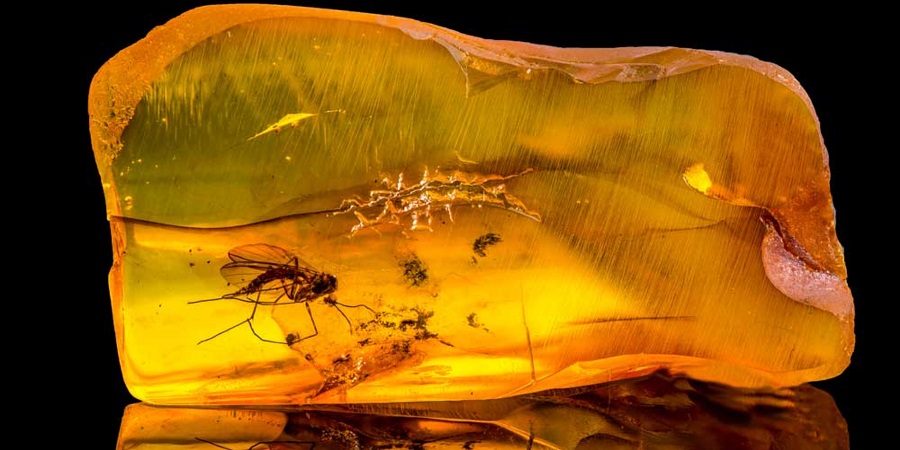 It is said that Burmese amber (or burmite) can be found in Chinese records as early as the 1st century AD. Hu-Gaung amber is called blood amber by the Chinese because it has a deep red color and clear. Prof. Wan Bo of China’s Nanjing Institute of Geology and Fossil Studies has written that he has found the first prehistoric snail fossil in amber in Kachin State.

This is a rare discovery of a small sea creature found intact in amber from more than ninety million years ago.

How is amber formed?

The resin (or pine oil) turns into a fossil over many years and turned out into amber. Usually, amber blocks are found only in forest-dependent animals.

They were suffocated by the resin of the trees and could not get out and were stuck to death.

There are about 40 kinds of animals that can be found in amber. Usually, most are lice.

Researchers said “But the amber with these small sea creatures is strange. If we really continue to study, I think a solution will come out”

In Myanmar, the main output regions of Amber are Kachin State, Hu-Gaung Valley, Tenai District, and Sagaing Division. Apart from Myanmar, there are other countries that produce amber Poland, Romania Canada, and the United States.

The quality of the amber from Myanmar is great the prices are higher because they include insects and pieces of branches inside.

How did this amber leave Burma?

“Amber is having in Myanmar’s gem law. According to the previous laws, foreigners cannot buy it. You can only buy it after auctioning at the gem fair,” the authority said.

In that amber, the outer shell of the coiled snail was broken, and the inner shell was full of sand. So the little ones on the beach probably died on the beach before they got sealed in the resin.

Researchers say that the resin fell on the beach, and the beach environment at that time was trapped in the amber block formed by the resin.

Is this amber officially out? Burmese geologists believe that it is possible to smuggle out of the market somewhere in Kachin State across the illegal border area.

99 million years old Amber was found in Kachin state (northern Myanmar) in 2015. Inside it, the world’s first intact Nosaurus tail stuck. After this, the international market is more interested in the Myanmar amber market.

Now the amber market has changed. Authority said that according to the latest approved jewelry law, Myanmar citizens can send any jewelry that they have legally acquired into their hands after paying legal taxes.

The story of Shan who took the dinosaur tail fossil Amber by pretending to be a local and went to the Kachin region controlled by the armed forces started to be interesting on the world news pages. “In the past, they were illegal because they did it secretly,” he said.

Some estimate that Myanmar amber trade is worth thousands of millions of dollars.