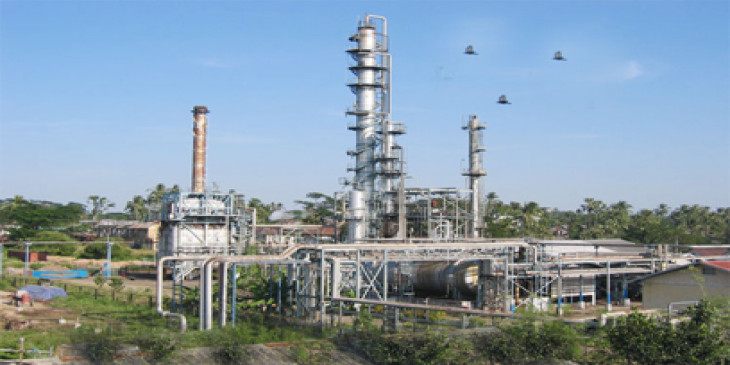 Thanlyin Oil Refinery is a large factory built in the early 19th century when the British occupied Lower Myanmar in 1852. It was the British-built first oil refinery factory in Myanmar, connected by waterways with oil-producing central Burma.

Since then, most of the Thanlyin inhabitants have been working as oil workers for generations. The refinery was destroyed during World War II and rebuilt in 1957. In 1979, with the help of Japan, new equipment was installed. After the installation, the oil pipelines connecting from Thanlyin to Mann oil fields were completed.

Former officers and employees intimately about the equipment they handled in the oil refinery. Thus, later employees had to study from them even after they had retired.

Workers did best their duty

Oil workers did the best of their duty while revolution against the British. Again In 1988, the one-party system revolutionization, the Thanlyin strike started from the entrance of the oil refinery. Oil workers and officers lost their job and some were given pensions who participated in the 8888 strikes.

There was a pleasant time before the 8888 strike. People were able to tell a certain time by listening to the siren of the factory. During those days, the people from Thanlyin would still remember that the factory gave siren on Martyrdom’s day.

After the military coup on September 18, 1988, throughout the entire period of the military rule until now, the sound of the siren has not been heard ever. For young and middle-aged people born after 1988, the sound of the siren at the oil factory will be a historic story.  After the sirens of the oil refinery went silent, throughout the period of the military government, the oil refinery began to lose revenue due to chaotic management. The public oil products were exploited in various ways like private products, and the factories had to be thinned out.

In addition, replacing administrators who do not have skills was also one of the reasons for the loss of the factory.

In 2017, there was news that the operation of Thanlyin Oil Refinery will be stopped entirely, and there was worry among the employees who depended on the factory.

In the coup d’état of 2021, Oil refinery workers actively participated in the opposition of the Military. Most of the factory workers were doing Civil Disobedience Movement.

Nevertheless, The history of the Thanlyin Oil Refinery factory was full of pride.