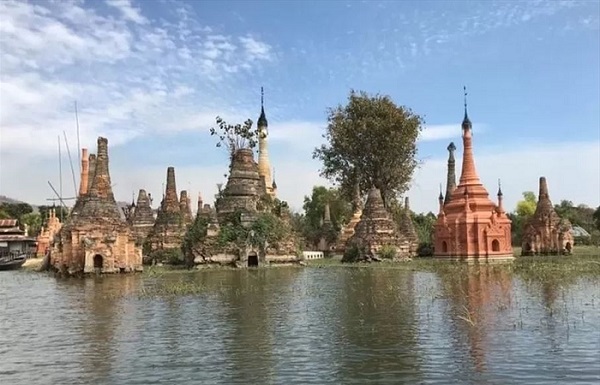 As for the places to visit in Shan State, people don’t know much about San Kar Inn and Mobye Inn. San Kar Inn located next to Inlay Lake. There are many hidden ancient cultural artifacts in the Sangka region which is also an interesting underwater town in Myanmar.

The History of SanKar

In 1479 A.D., Braline and his followers settled in SanKar area. The currently flooded plain was once a city called PinLon. Historian Sawtaw said that successor moved and built cities in this area. After this, in 1774, in the year 1136 of the Burmese era, King Min Khun Phyu founded Sankar City as the fifth city. In the year 1790, Sankar Town had almost 1960 houses.

In 1970, after the construction of the Mobye Reservoir dam, water began to enter the Sankar area. Around 1973, the floodwaters were too much for people to live in, and almost half of the Sankar area was flooded. Many nearby villages had to move, and this flooded area became the next dam and it was becoming underwater town in Myanmar in later years. The current Sankar Inn water is 4 miles wide from east to west and 7 miles length from south to north. The water depth is around 15 to 20 feet.

The cultural heritage of Sankar region

If you look at the pagodas and art in the city of Sankar, it is obvious that this area was once a place where cultural heritage flourished. The work of the stupas built in this area is the work of the Yunshans, and historians believe that the Yunshans lived here. Until now, the local residents still speak the Shan language.